I was one of many who thought that maybe it was too soon for ANOTHER Spiderman reboot. This is our third Peter Parker in 10 years. I understand that Marvel was hype that they finally got production rights for your friendly neighborhood web slinger, but this is a short 3 years later, 2  if you consider “Civil War” as the kick off of Marvel’s Spidey. I also really like Garfield (although not in this role) and Raimi (most of the time), so I was worried that this would fall flat to me as a underwhelming cookie cutter Marvel Studios film.

I spent months leading up to this not really caring about Tom Holland. He was not on my radar, all I knew is that he was young and British and had a few forgettable moments in Captain America Civil War. I didn’t really have any opinions about him until maybe 2 days before the movie was released, when my friend texted me a clip of him on Lip Sync Battle, and I almost fell out of my office chair. I am not going to take up precious time to go too into this, but in short it is a work of art, and the video is what convinced me I had to see this opening weekend. In 2 short minutes I needed more Holland. So thank you Spike. 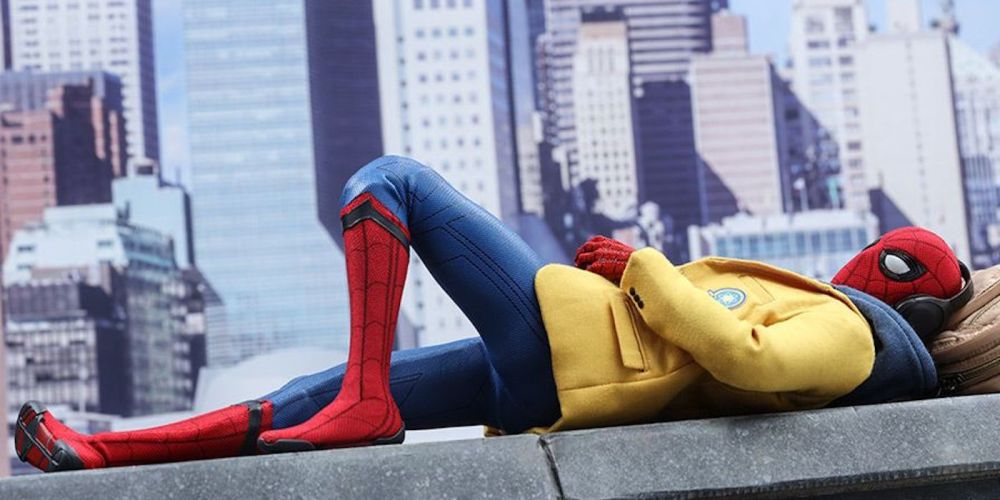 As for the bones of the plot, I am forever grateful that there was no origin story included in this. We know what happened, we’ve seen it a million times. Bitten by a spider, Uncle Ben dies, spurring Peter Parker into his life as a masked vigilante. The movie opens by setting up the main villain briefly, then cutting to some “found footage” style clips from Parker’s last mission with the Avengers. After that, we are thrown into the monotony of his average high school life, and my second favorite scene, where Spiderman is seen doing various good deeds around Queens to The Ramones’ Blitzkrieg Bop. It is funny, relatable, and gives us the scale of his standard day on the job. This scene also starts with him awkwardly changing out of his school clothes into his suit, instead of just having him jump behind a wall in cargo shorts and pop out a second later in latex. For that alone I would give this a positive review. And for the scene were we try to watch Spiderman navigate the suburbs. Not super web conducive.

Things progress from there as Spiderman discovers a local arms dealer who has been supplying the area with supernatural weapons. That arms dealer, the Vulture (played by Michael Keaton) isn’t a psychotic evil character, or some sort of all powerful godlike adversary. He is just a broken man who was pushed to his limits and screwed over by the government, turning himself to a life of crime. I found the main conflict of Homecoming to be refreshing, this is a local bad guy, a believable villain. Especially for a high school aged kid who is tracking down clues during a fieldtrip to DC. Where this movie succeeded in my eyes was in the scope, which was just right for Spidey’s first big bust without the Avengers support.

I am going to end this by mentioning my favorite scene of the movie, so we are getting into spoiler territory. Peter Parker discovers when he goes to pick up his crush for homecoming, that her father is the dealer he has been tracking for the last couple of weeks. This leads to an amazing car ride scene where Peter’s date Liz is slowly revealing (without her knowledge) to her father that Peter must be the Spiderman who has been causing him so many problems. This culminates with a one on one conversation between Holland and Keaton in a car parked outside the dance. Had this not been a superhero movie, I would be demanding that Keaton get an Oscar nod here. 8.5/10